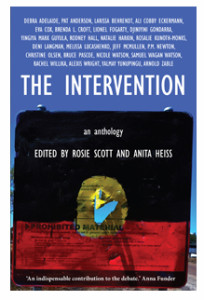 “The Intervention to us was like Australia declaring war on us and in the process they demonised and dehumanised Aboriginal men, women and children.”
– Rosalie-Kunoth Monks – Elder and Northern Territory Australian of the Year.

June 21 will mark eight years since the introduction of one of Australia’s most racist government policies, – the Northern Territory National Emergency Response package – otherwise known as the NT Intervention.

Many Australians are still waiting for the outcry over the suspension of the Race Discrimination Act which allowed this legislation to pass, not once, but twice. In 2012, the Intervention was renamed “Stronger Futures” and designed to impinge further on the human rights of those in remote communities for another decade.

Award-winning and internationally recognised Indigenous and non-Indigenous Australian authors and commentators have taken a stand the best way they can, by using the power of their writing to generate much needed discussion and debate – in homes, universities and in work places.

Edited by Rosie Scott and Anita Heiss, the Intervention Anthology includes statements by Elders, poetry, commentary, fiction and non-fiction as a means of reaching out and speaking to as many Australians as possible.

“A powerful collection of views from Aboriginal Elders, experts, lawyers and some of the nation’s finest writers. And an indispensable contribution to the urgent question of the wellbeing and dignity of Aboriginal Australians. As Rosalie Kunoth-Monks puts it ‘We are your people and you are our people.’ We can’t not listen to each other,’ said Anna Funder, an international award winning author.

The Intervention: an anthology will be launched by Gillian Triggs in Sydney on 1 July at the National Centre of Indigenous Excellence in Redfern.

Other events include: 9 July at Ashfield Town Hall; 4 August at Charles Darwin University. Events are also being planned in Newcastle, Melbourne and other locations.

The Intervention will be available to purchase online from Booktopia.

This project would not have been possible without the support from WITA (Women Inspired to Action) for crowdfunding, ‘concerned Australians’, the Copyright Agency Cultural Fund, and extensive in-kind support from Curtis Brown, Kirby Brown and Booktopia.