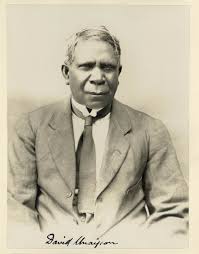 Of the Ngarrindjeri people, a preacher, inventor and writer. David had a major contribution to Australian society with his public speaking, writings and inventions, particularly his patent for the shears. Unaipon is featured on the Australian $50 note in commemoration.

He was the first Aboriginal writer to publish in English, the author of numerous articles in newspapers and magazines, including the Sydney Daily Telegraph, retelling traditional stories and arguing for the rights of Aboriginal people.

Sourced from Wikipedia: the free Encyclopaedia

“My race – the Aborigines of Australia- has a vast tradition of legendsmyths, and folklore stories. These, which they delight in telling to the younger members of the tribe, have been handed down orally for thousands of years. In fact, all tribal laws and customs are, first of all, told to the children of the tribe in the form of stories, just as the white Australian mother first instructs her children with nursery stories. Of course, the mothers and the old men, in telling these stories, drag them out to a great length, putting in every detail, with much gesture and acting; but in writing them down for our white friends I have used the simplest forms of expression, in order that neither the meaning nor the ‘atmosphere’ may be lost.

As a full-blooded member of my race I think I may claim to be the first – but I hope, not the last- to produce an enduring record of our customs, beliefs and imaginings.”