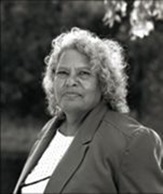 Doris Pilkington Garimara AM (born Nugi Garimara), also known as Doris Pilkington, she was best known for her 1996 book Follow the Rabbit-Proof Fence, a story of three Aboriginal girls, among them Pilkington’s mother, Molly Craig, who escaped from the Moore River Native Settlement in Western Australia and travelled for nine weeks to return to their family. The book was made into an internationally successful film in 2002, directed by Phillip Noyce.

Her follow-up book, Under the Wintamarra Tree, details her own escape from Moore River. Home to Mother is her children’s edition of Follow the Rabbit Proof Fence. In the four books, Caprice, a Stockman’s Daughter, Follow the Rabbit-proof Fence, Home to Mother, and Under the Wintamarra Tree, Pilkington documented three generations of women in her family.

In 1990 Pilkington’s book Caprice: A Stockman’s Daughter the first of the trilogy, won the Queensland Premier’s Literary Awards, Unpublished Indigenous Writer – The David Unaipon Award. She was appointed co-patron of Australia’s State and Federal Sorry Day committee’s Journey of Healing in 2002. In May 2008 she was awarded the $50,000 Red Ochre Award.