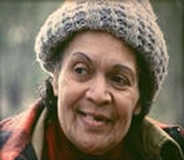 Hyllus Noel Maris (1933-1986), Aboriginal rights campaigner, community worker, educator, poet and scriptwriter, was born on 25 December 1933 at Echuca. Hyllus was of Yorta Yorta and Wurundjeri (Woiworung) descent and spent her early childhood at Cummeragunja Aboriginal station, New South Wales. Her grandmother educated her in Aboriginal culture, genealogy and history, and both parents were activists; her father was also a prominent sportsman.

In 1977 a scholarship from the Commonwealth Department of Aboriginal Affairs enabled Maris to study social policy and community development in London with Richard Hauser. Returning to Melbourne to pursue educational and cultural work, she collaborated with Sonia Borg in writing Women of the Sun (1981), a television series dealing with the experiences of Aboriginal women through two hundred years of colonisation.