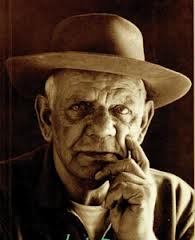 In 1979 his first full-length play Kullark, was a documentary on the history of Aborigines in WA. Other plays published by Currency include No Sugar, The Dreamers, Barungin: Smell the Wind, In Our Town and for younger audiences, Honey Spot and Moorli and the Leprechaun.

In 1977, he received the British Empire Medal and in 1985 received the Order of Australia. He received the Sidney Myer Performing Arts Award, an Hon. D.Litt. from Murdoch University and was elected Citizen of the Year in WA. In 1989 Davis received a Creative Fellowships.

Sourced from the National Museum of Australia.

To the Others
You once smiled a friendly smile,
Said we were kin to one another,
Thus with guile for a short while
Became to me a brother.
Then you swamped my way of gladness,
Took my children from my side,
Snapped shut the law book, oh my sadness
At Yirrakalas’ plea denied.
So, I remember Lake George hills,
The thin stick bones of people.
Sudden death, and greed that kills,
That gave you church and steeple.
I cry again for Warrarra men,
Gone from kith and kind,
And I wondered when I would find a pen
To probe your freckled mind.
I mourned again for the Murray tribe,
Gone too without a trace.
I thought of the soldier’s diatribe,
The smile on the governor’s face.
You murdered me with rope, with gun
The massacre of my enclave,
You buried me deep on McLarty’s run
Flung into a common grave.
You propped me up with Christ, red tape,
Tobacco, grog and fears,
Then disease and lordly rape
Through the brutish years.
Now you primly say you’re justified,
And sing of a nation’s glory,
But I think of a people crucified –
The real Australian story.