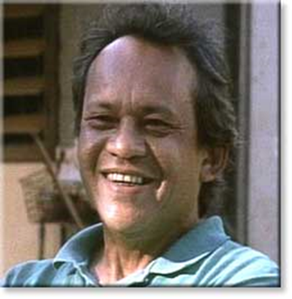 Jimmy was born in Broome in 1948, to a Bardi Aboriginal mother with Scottish heritage and a Broome born father whose parents were Chinese and Japanese.

In 1981, Jimmy and other musicians from Broome formed the band Kuckles in Adelaide while they were studying at the Centre for Aboriginal Studies in Music (CASM). The band returned to Broome, and with Chi (as the author), later became the inspirational heart and creative drive behind the acclaimed stage musical ‘Bran Nue Dae.’ A hit at the 1990 Festival of Perth, the musical eventually toured Australia winning numerous awards (including the prestigious Sidney Myer Performing Arts Award). Jimmy had an instrumental role in the formation of the Black Swan Theatre. Its success led Jimmy to create a second musical, Corrugation Road.

Jimmy’s dedication to Australian artistic endeavour and justice for Indigenous peoples has seen him recognised through a number of prestigious awards. He was honoured by the State of Western Australia as a Living Treasure. And the Commonwealth Government of Australia awarded him the Centenary Medal for his contribution to Australian society. Jimmy was awarded the 1997 Red Ochre Award. And he was a patron of SANE Australia