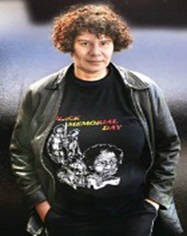 Lisa was an Aboriginal Australian poet, photographer, activist, spokeswoman, dramatist, comedian and broadcaster. She was a Goernpil woman of the Noonuccal people of Minjerribah (Stradbroke Island), Queensland. Lisa died unexpectedly at her home in Melbourne. She was 45 years old.

She wrote Dreaming In Urban Areas (UQP, 1996), a book of poetry which explores the experience of Aboriginal people in contemporary society. She was awarded the Deadly prize in 2006 for making an outstanding contribution to literature with her play The Dirty Mile: A History of Indigenous Fizroy, a suburb of Melbourne. Bellear was a prolific photographer. Her work was exhibited at the 2004 Athens Olympic Games and at the Melbourne Museum as part of their millennium celebrations.

She was also a founding member of the Ilbijerri Aboriginal & Torres Strait Islander Theatre Co-op, the longest-running Aboriginal theatre troupe in Australia.