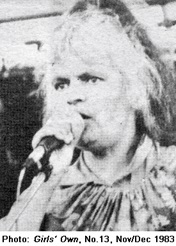 On the fourth day of the New Year, Australia lost one of its most respected Aboriginal women, Aunty Maureen Watson. Tireless educator and campaigner for the rights of her people, gifted and passionate performer on stage and film, poet, author and playwright, children’s author, beloved mother, grandmother and great-grandmother, and recognised Murri elder in South-East Queensland.

Maureen was a founding member of Indigenous organisations that include Radio Redfern and the Aboriginal people’s Gallery. She attended the first National Aboriginal Theatre Workshop in Sydney and a Black Film-makers course. Her first collection of stories and poems, Black Reflections was published in 1982 – she went on to produce six more poetry anthologies, one children’s book and one picture book. She has performed and taught in many venues, from major festivals to local schools and arts organisations.

She was at the forefront of Aboriginal protests against the Commonwealth Games in Brisbane in 1982, facing arrest during demonstrations. In 1996 she was awarded the Australia Council Red Ochre award in recognition of her national and international contribution towards recognition of Aboriginal arts. Also she received the inaugural United Nations Association Global Leadership Prize for her outstanding work towards building cross-cultural understanding and harmony.