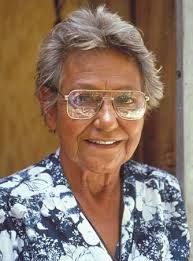 During the 1960s she emerged as a prominent political activist and writer. She was Queensland state secretary of the Federal Council for the Advancement of Aboriginal and Torres Strait Islanders (FCAATSI),and was involved in a number of other political organisations. She was a key figure in the campaign for the reform of the Australian constitution to allow Aboriginal people full citizenship.

She wrote many books, beginning with We Are Going (1964), the first book to be published by an Aboriginal woman.

She was awarded an MBE in 1970, returning it in 1987 to protest the Australian Bicentenary celebrations, and to make a political statement at the condition of her people.

Sourced from the Australian Poetry Library

They came in to the little town
A semi-naked band subdued and silent
All that remained of their tribe.
They came here to the place of their old bora ground
Where now the many white men hurry about like ants.
Notice of the estate agent reads: ‘Rubbish May Be Tipped Here’.
Now it half covers the traces of the old bora ring.
‘We are as strangers here now, but the white tribe are the strangers.
We belong here, we are of the old ways.
We are the corroboree and the bora ground,
We are the old ceremonies, the laws of the elders.
We are the wonder tales of Dream Time, the tribal legends told.
We are the past, the hunts and the laughing games, the wandering camp fires.
We are the lightening bolt over Gaphembah Hill
Quick and terrible,
And the Thunderer after him, that loud fellow.
We are the quiet daybreak paling the dark lagoon.
We are the shadow-ghosts creeping back as the camp fires burn low.
We are nature and the past, all the old ways
Gone now and scattered.
The scrubs are gone, the hunting and the laughter.
The eagle is gone, the emu and the kangaroo are gone from this place.
The bora ring is gone.
The corroboree is gone.
And we are going.’